Since the Corporate Tax Reform Act 2008 came into force, rent and lease payments for the rental of immovable fixed assets (of which the property owner is the landlord) claimed as operating expenses must be added to the trade tax base which is subject to trade tax.

The tax authorities have long taken the view that this addition should also be applied to tour operators who rent various hotel rooms for their customers in the course of package tours offered.

However, the Federal Fiscal Court has put a stop to this assumption – and thus decided in favour of the taxpayers.

In the following article, we have taken a closer look at the topic and explain why there is no trade tax addition when tour operators purchase hotel rooms.

How is the trade tax determined?

The trade tax base is the assessment basis for the application of the municipal assessment rate, which ultimately results in the trade tax.

The trade tax addition according to § 8 No. 1e GewStG

Pursuant to § 8 No. 1e GewStG, 50 percent of the rental and lease payments (including leasing rate) received as business expenses to reduce profits for the use of immovable fixed assets owned by another party must be taken into account.If the resulting amount together with the other additions pursuant to Section 8 No. 1 GewStG (e.g. expenses for interest on debts or the transfer of rights) exceeds the tax-free amount of EUR 200,000.00 (previously EUR 100,000.00), a total of 25 percent of the excess amount is added to the profit from commercial operations. 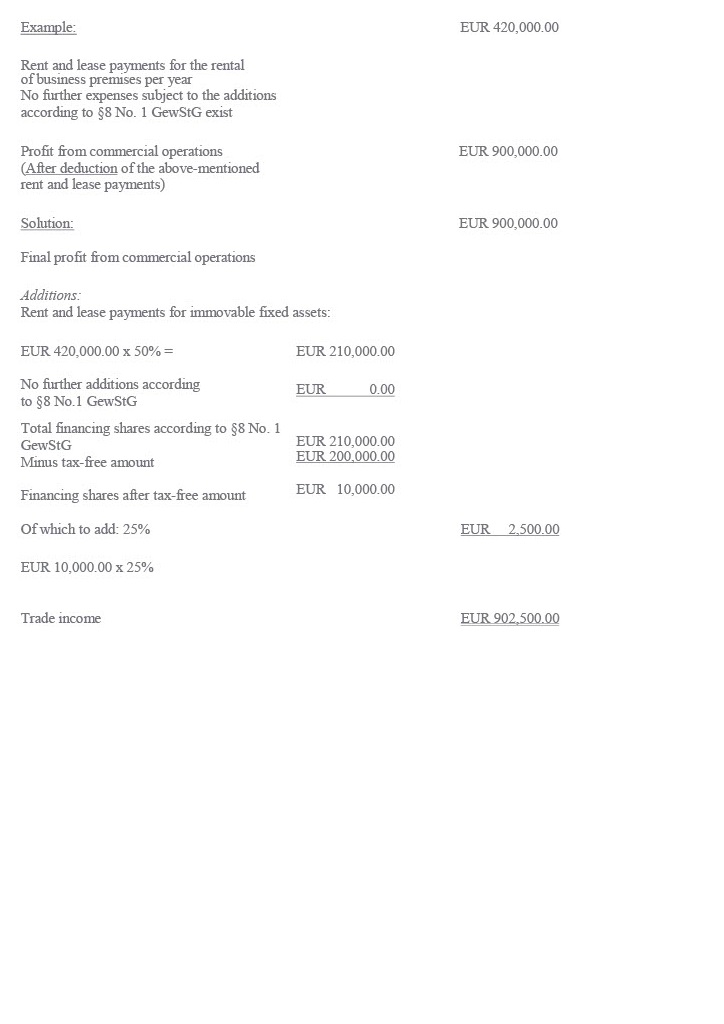 The Federal Finance Court had to decide in the last year a case, in which the tax office wanted to make such an addition of rent and lease interest.

Plaintiff was a tour operator in the legal form of a GmbH, which offers package tours for its customers. For this, it rents among other things hotel rooms at different hotels. In addition, the company locked contracts over passenger transportation, support services and activities at the vacation place.

In the course of the 2008 trade tax return, only additions were made for rental and lease interest in connection with the rental of the tour operator’s business premises. However, after conducting a tax audit, the tax office took the view that the tour operator had not purchased a „hotel service“ in total. According to the tax office, part of the remuneration paid to the hotels would be rent, which would have to be taken into account when adding it to trade tax.

An appeal was lodged against the tax assessment notices, which were subsequently amended. However, the tax court decided in favour of the tax office. Against this, the GmbH inserted revision as plaintiff with the Federal Finance Court (BFH) – with success!

The decision of the BFH

The BFH ruled in favour of the tour operator and explained that for a trade tax addition it was necessary, in addition to the existence of a rental and lease agreement, that on a notion view the rented assets would represent fixed assets of the taxpayer if they were in his ownership (so-called „industrial property fiction“).

This assumption of notional fixed assets was rejected in the present dispute. The reason is that if the hotel rooms were only available for a short period, only a correspondingly short period of ownership would have to be assumed.

For the allocation of assets to fixed or current assets, the concrete business purpose of the company must be taken into account. In addition, it should be based – as far as possible – on the taxpayer’s business circumstances.

The decisive factor here was that the tour operator’s business model is designed in such a way that it does not require long-term use of the assets provided by the hoteliers. Rather, it only serves a temporary use, since the tour operator has to adapt to the constantly changing market requirements (e.g. changing customer wishes).

Definition of fixed and current assets:

Both fixed and current assets are shown on the assets side of a company’s balance sheet.

Current assets, on the other hand, are not explicitly defined in the HGB. However, the reverse conclusion of § 247 (2) HGB shows that these include assets that are not intended to serve the company on a permanent basis (e.g. goods).

A decision was made to the disadvantage of the taxpayer in the case of a concert organizer who rented various locations to hold concerts.

Here, according to the BFH, solely the circumstance that the organizer needed the rented premises to carry on his business was sufficient. According to the opinion of the BFH, this already led to the fulfillment of the industrial property fiction.

The decision of the BFH concerning the tour operator is to be welcomed very much and let the travel industry breathe a sigh of relief in the last year from fiscal view. Depending upon size and order volume of the travel offerer a negative decision of the BFH would have led under circumstances to substantial financial auxiliary loads by trade tax payments.

Do you have any questions on this topic? Then get in touch with us!