Taxpayers face an enormous challenge. Due to the parallelism of price setting and outcome testing, they must review their monitoring systems and transfer pricing adjustments in the corona crisis. This has to be done with regard to the need for action and the options for action. For the transfer pricing drive on sight, we hereby provide you with a navigation aid.

Are transfer pricing adjustments necessary in the Corona crisis?

Against the background of a disturbed market environment, a relevant question arises for transfer pricing practitioners: Do the acute economic distortions have to be considered and addressed in transfer pricing adjustments based on the Transactional Net Margin Method (TNMM)? And if so, how?

There are basically two approaches to for transfer pricing:

In Germany, the focus has been set on price setting so far, whereas in international comparison, preferences tend to be more towards outcome testing. For this reason, German MNE (multinational enterprise) try to bridge the gap between budgeted and actual transfer pricing results by means of transfer pricing adjustments based on the TNMM.

The target range, which is regularly determined via benchmarks, is of major importance in this context. However, since corresponding data will only be available in the databases in the course of 2021, corona effects cannot (yet) be taken into account here, raising the question how to deal with target/actual differences and how these can be balanced?

Is there a need for action on transfer pricing adjustments in the Corona crisis?

That is the key question. Determine whether there is any corona-related need for action at all. This will help you to avoid rash measures. The first and most important indicator of an economic slump due to the current corona pandemic are target-performance comparisons of local financial results. You can assume, at least for the current fiscal year, that corona effects are not (yet) or only insufficiently considered in the budgeting for 2020. From a transfer pricing perspective, this could be called a „stroke of luck“, as it allows unfiltered identification of target/actual differences. Indicators here are, for example, the development of sales and incoming orders, the development of the price expectations enforceable on the market towards suppliers and customers as well as capacity utilisation in production. Please bear in mind that in industries and sectors with longer lead times, corona effects only occur with a delay.

Another focus should be a detailed cause-and-effect analysis to exclude the possibility that other negative effects play a role. In particular, factors that were taken into account with negative expectations within 2020’s budgeting in Q4/2019 should be considered: US election? Negotiations on the Brexit Trade Agreement? The economic slowdown observed in large parts of 2019?

Finally, the development of earnings on local levels should be monitored more closely and not only towards the end of the fiscal year. Depending on the given ERP capabilities and resources, regular reports (monthly, quarterly) should initially provide sufficient certainty to identify corona effects in good time. In addition and against the background of the ongoing development and the not yet fully apparent course of the year, concrete measures should only be initiated when there is sufficient certainty for a decision.

If transfer pricing adjustments are agreed on in intra-group agreements, their suspension is generally ruled out. We also advise our clients not to change at short notice transfer pricing systems that have been tried and tested over many years and in the best case repeatedly audited and accepted. We recommend our clients to consistently continue with the implemented system, which also allows corona effects to be reflected in transfer price adjustments. For this, the benchmarks and target ranges mentioned at the beginning are of particular importance.

If you avoid the common narrowing of benchmarking results via interquartile ranges, you have more leeway. This is basically possible, both from an OECD and a German tax perspective. However, the German legislator has limited this to cases in which full comparability exists, Section 1 paragraph 3 sentence 3 Foreign Tax Act (AStG). Decisive factors here are in particular product characteristics, contractual terms, business strategies, market and competitive conditions and, last but not least, functional and risk profiles. As the benchmarking process is based on a rather broadly understood product comparability in order to achieve a high degree of functional comparability, most MNE will not have this option.

Loss allowance in the comparative set

Routine enterprises, for which TNNM-based transfer pricing adjustments alone are suitable, are expected to generate small but relatively stable profits in the normal course of business. Therefore, loss-making enterprises are regularly excluded from benchmarks, which increases both the overall and interquartile ranges.

The fact that this does not always have to be the case, and thus not even in times of economic uncertainty, is demonstrated by the German tax authorities themselves with their example from the Administrative Principles – Procedures of 2005. In note 3.4.12.5. lit. d), the tax authorities themselves carry out a benchmark as an example, even accepting the extreme case of a loss-making company with a so-called persistent loss-maker, and then excluding this within the scope of the narrowing of the range, but tolerating the reducing effect on the final range: 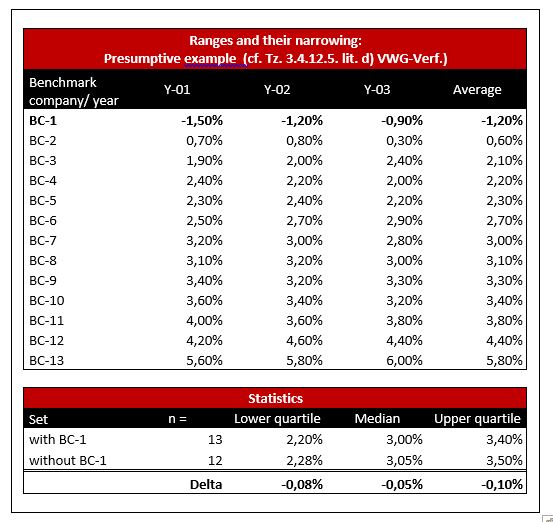 Experience from other crises

For example, the (combined) EBIT margin of the German car manufacturers BMW, Daimler and VW fell during the financial and economic crisis 2008/2009 from 6.4 percent in 2007 to 4.9 percent in 2008 to 0.1 percent in 2009 and averaged 4.4 percent for the years 2006-2010. Such statistics are also available for other industry/sector and region combinations, so that corona effects should at least be able to be approximated in a comprehensible manner based on current company figures. The actual effects, on the other hand, will not be available in the relevant databases until 2021 and will thus be quantifiable.

Similarly, but with an unusually longer time horizon, the economic and financial crisis of 2008/2009 could also be taken into account if the benchmarks’ period under review were extended, i.e. from usually three to more than ten years. With this consideration, however, it is already questionable whether crisis effects would then be visible at all or whether they would be overlaid by the economically unusually stable and successful 2010s.

Irrespective of the current circumstances, taxpayers are still obliged to make serious efforts to determine transfer prices in accordance with the arm’s length principle, and this will be reviewed at the latest during the next tax audit.

However, since such a review usually takes place with some delay, i.e. retrospectively, transfer pricing documentation as well as the fulfilment of cooperation obligations will play an important role in the defence of corona measures. Therefore, you should already now ensure that the available options, their consideration, the decision taken and the measures derived from it are transparent, comprehensible and comprehensively documented. Particular importance will be attached to the identification of the need for action based on target/actual comparisons, but also – where taken – to the modification of target ranges.

Both in terms of its cause and in terms of its economic impact, the Corona crisis is an event that has never before occurred in this form. We must assume that it will continue to have a lasting impact on economic activities.

For MNE with transfer pricing adjustments based on TNNM, there are particularly three recommendations for action: Firstly, affected companies should monitor their margins more closely in order to be able to identify corona effects early on. Then, they can initiate measures, check their effectiveness and adjust them if necessary.

Secondly, it seems advisable to take a detailed look at the most important instrument for transfer pricing adjustments, the benchmarks and the target profitability derived from them, in order to evaluate possibilities for appropriate crisis adjustments.

Third, you should focus on transfer pricing documentation. Particularly in corona times, it is important to weigh up environmental influences, considered alternatives and decisions made in a transparent manner and to document why you deviate from the usual course of transfer pricing.